Alright, I have a confession to make… I LOVE Guardians of the Galaxy: Awesome Mix Live and I’m not ashamed to admit it. In I’m ready to cancel the Eat to the Beat and Garden Rocks concert series just so this show can run all year round! (We’ll let the Broadway concert series run concurrently since that’s pretty great as well).

I don’t care that it doesn’t make sense in World Showcase or that it’s storyline is paper thin. This show is for lack of a better word… Awesome! Its super campy, completely over the top and SO much fun! 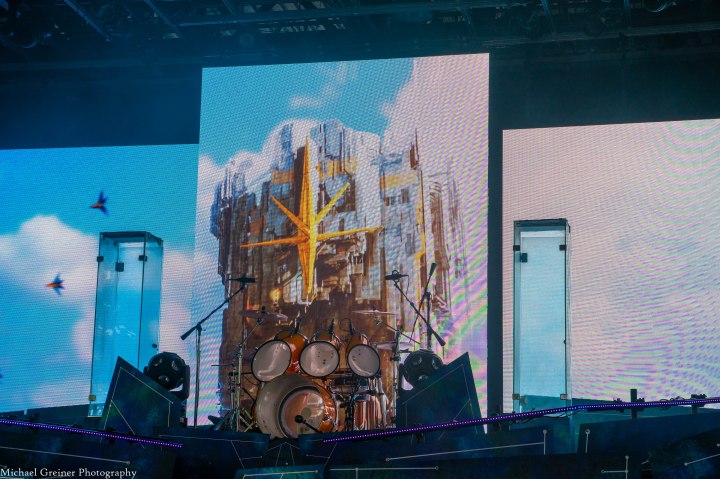 The thin plot is that as part of diplomatic relations with earth (which they are now aware of “thanks to the one they call… Starlord”), the Xandarian Chamber Orchestra is here for a concert. 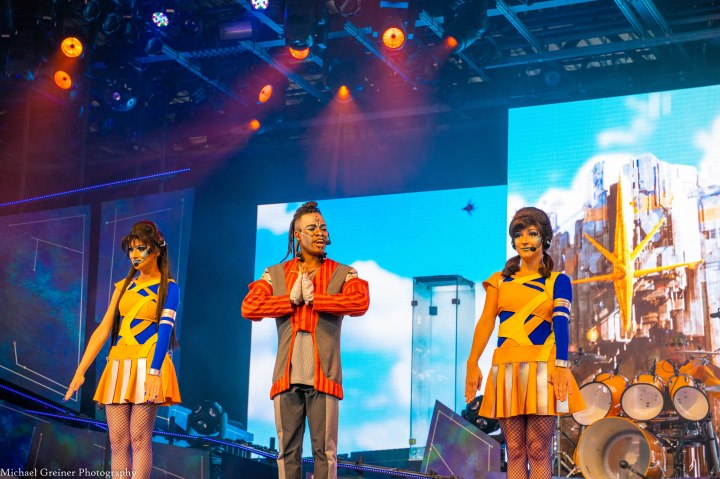 Their style of music is hilariously terrible, including lots of long screams and instruments held completely upright. 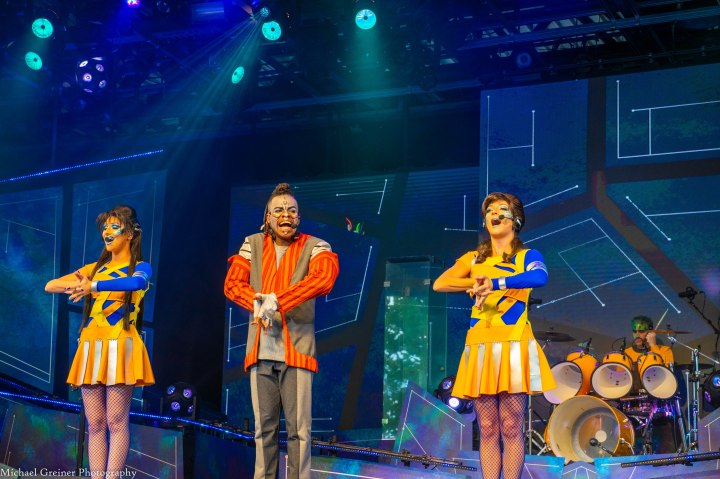 Thankfully, Quill arrives to save the world… from bad music! 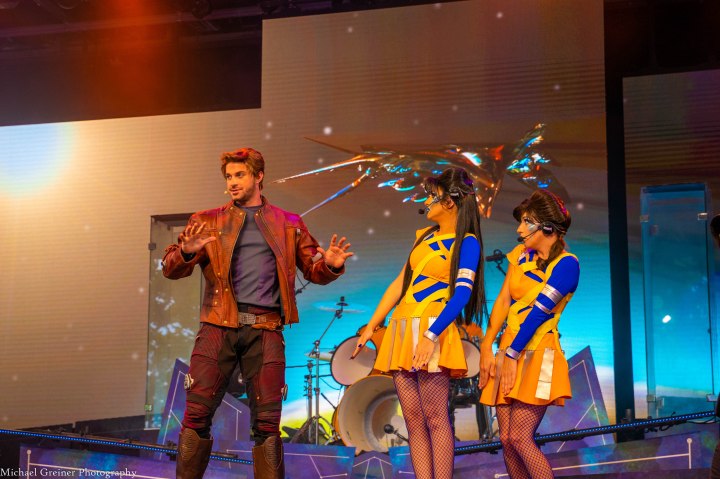 Gamora arrives as well, though she seems ready for a fight. 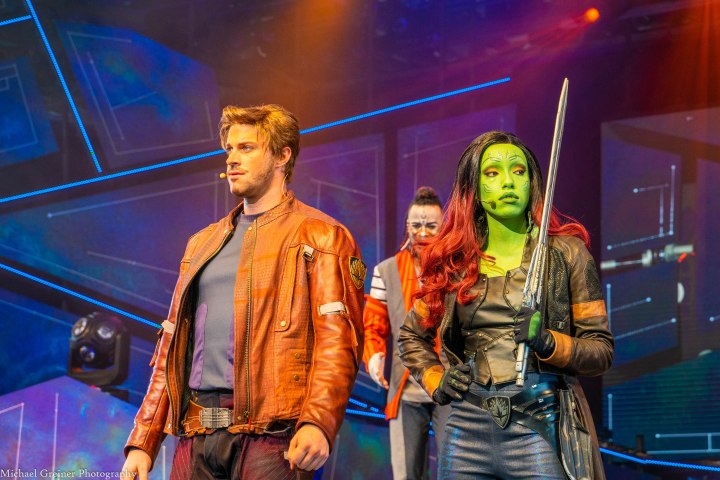 The show rotates between a couple of casts, both of which are excellent. Star-Lord and Gamora don’t do any of the singing, but their dialogue is consistently entertaining and ties the whole show together. The Star-Lord actors in particular do a great job of bringing the charming jerk shtick of Chris Pratt in the films.

Quill decides hes going to teach the orchestra how to make some real music. He flips those guitars sideways and calls on Groot (who appears via screen in his GotG2 form) to patch some tunes from his playlist into the musicians headsets.

Gamora isn’t happy to be wasting time with this when there are other galaxies to guard.

Before you know it, we are rocking out. Both the singers and musicians are fantastic and Quill’s dance moves add a lot to the fun. 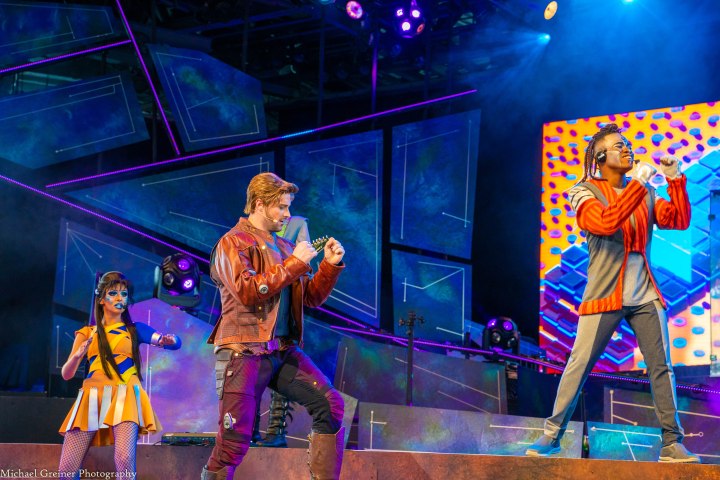 The setlist is comprised of 5 songs, with a total show time of roughly 22 minutes. The songs are:

All of these are great songs, with 3 of them featuring prominently in the Guardians films.

Gamora is ready to leave after the first song but thankfully, Quill is having none of that. 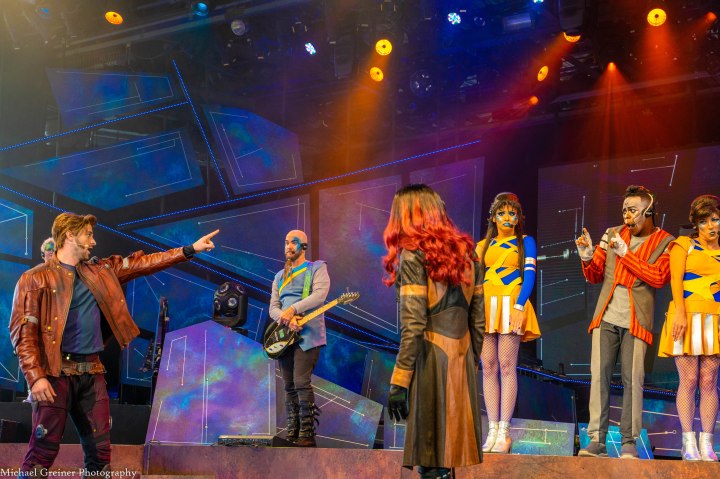 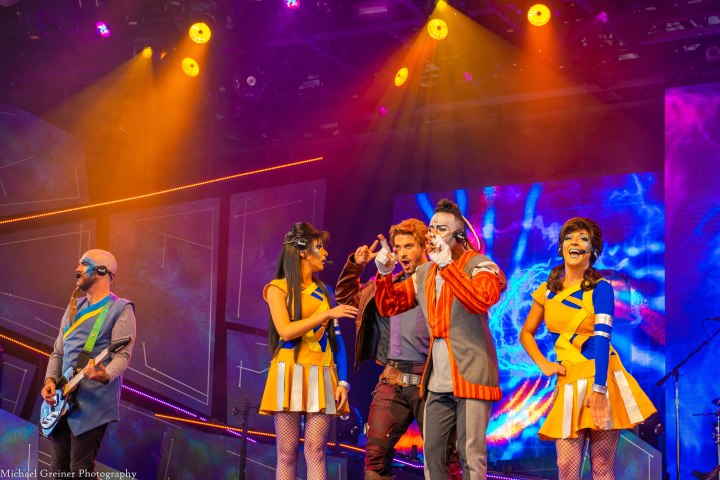 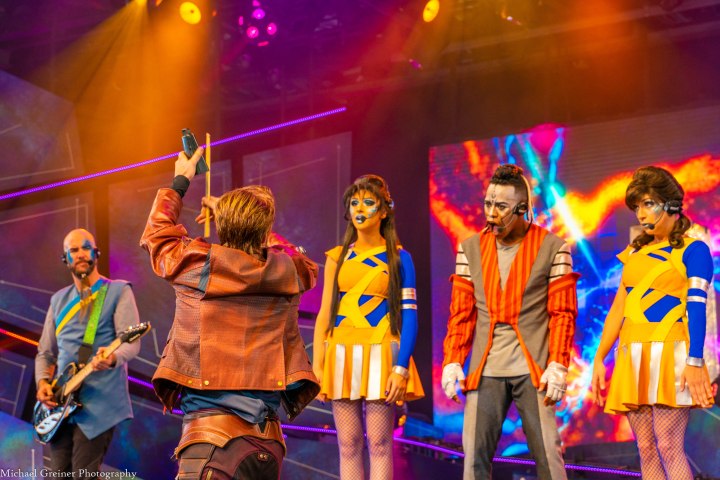 Things get really crazy once the bubble machine fires up. Like the films, this show is full of vibrant and interesting visuals to go only with its catchy tunes. 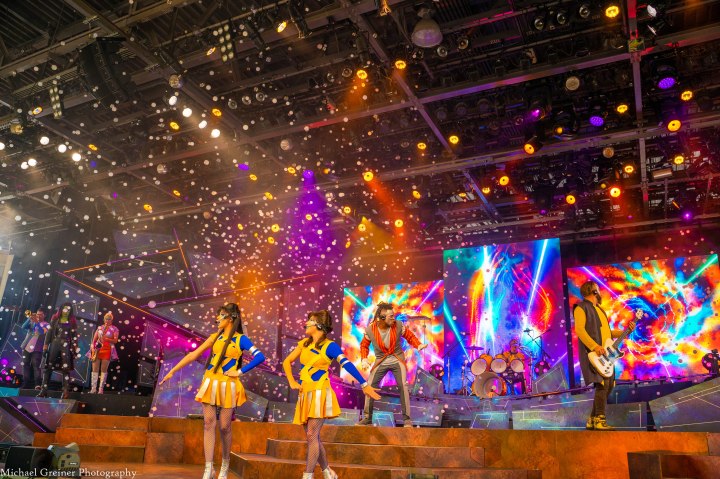 Quill breaks things down for a minute to teach the audience some sick dance moves. 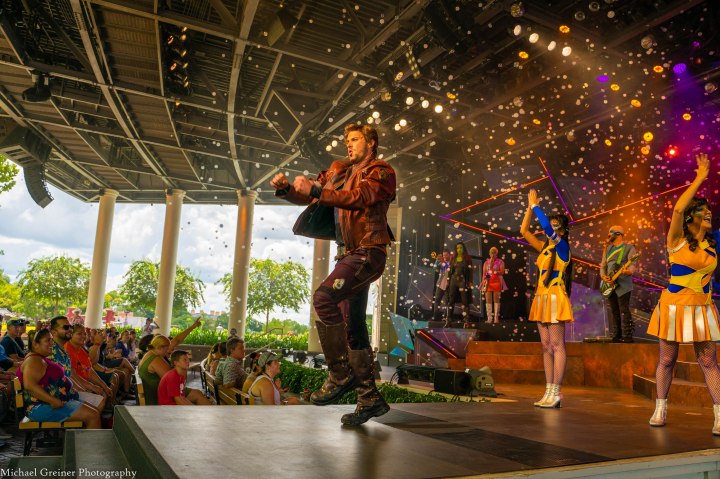 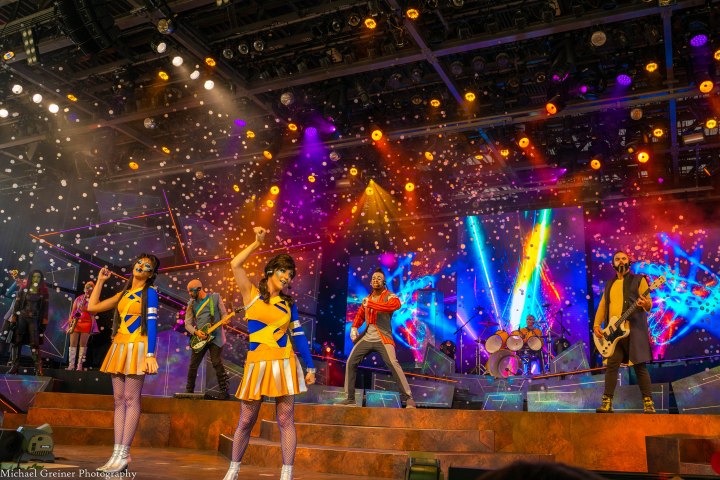 After the 2nd song, Gamora wonders why only the male species seem to sing on this planet.

This gives us an opportunity to let the 2 female leads absolutely kill a classic Pat Benatar song. 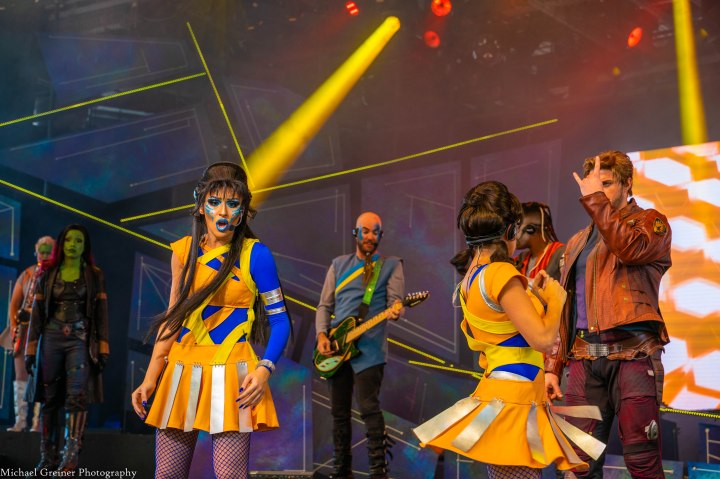 Seriously, the level of talent in this show between the musicians and singers is mind boggling. I’ve seen many many shows on Broadway and these singers are legitimately that level of talent. Likewise, the show features a full six piece band (not counting the singers) with horn players and all. They sound really great! 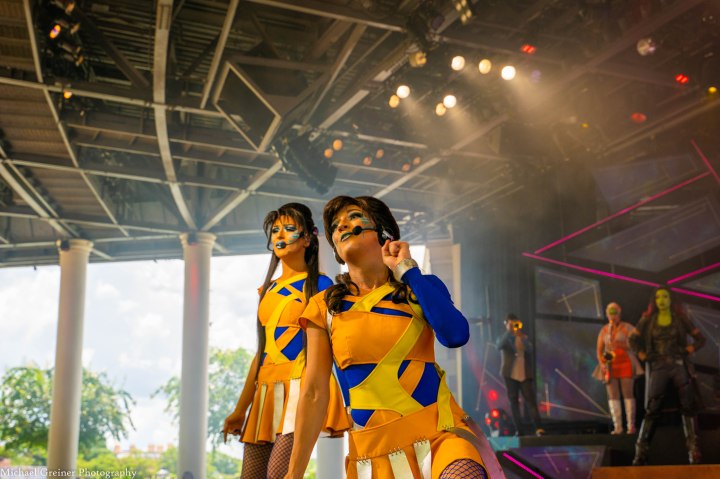 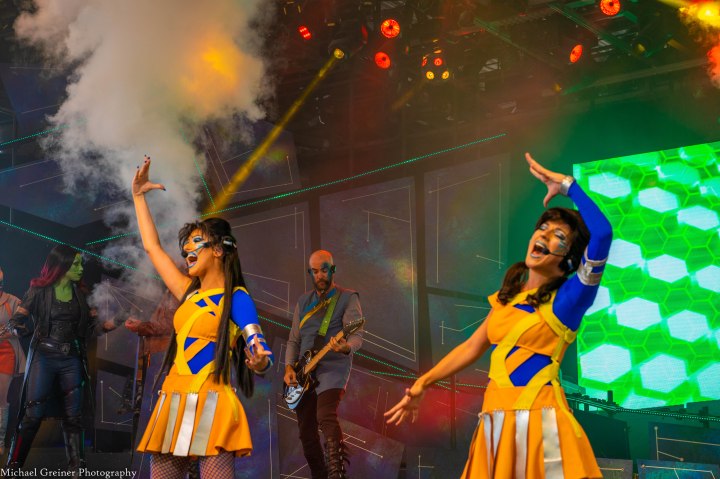 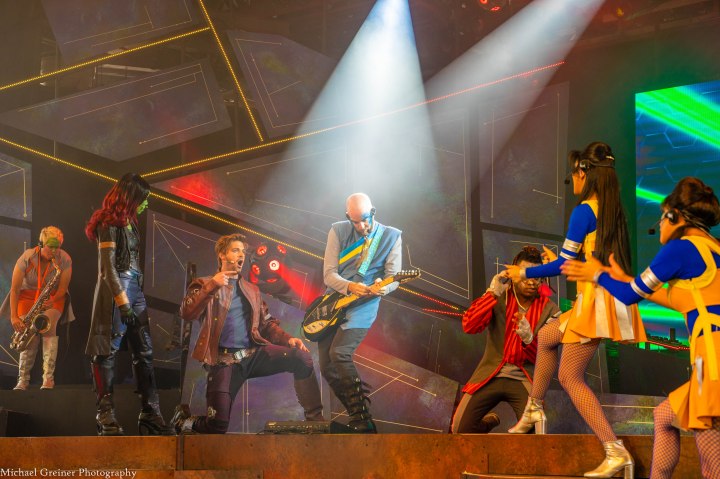 Though Gamora doesn’t sing, she decides to chip in with some sweet Karate moves… because why not? 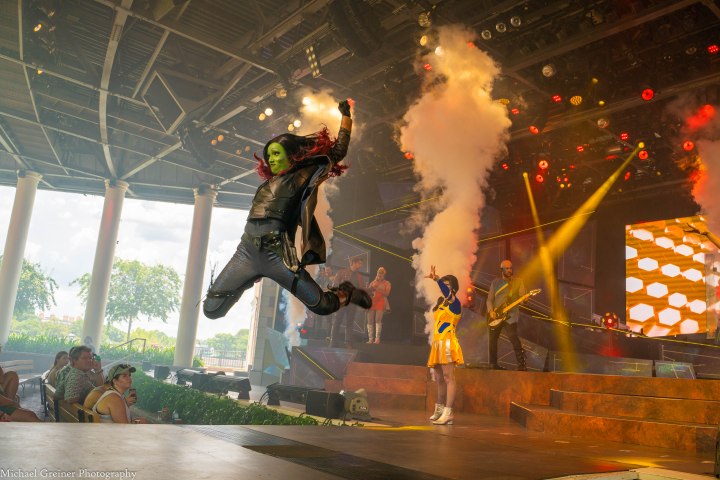 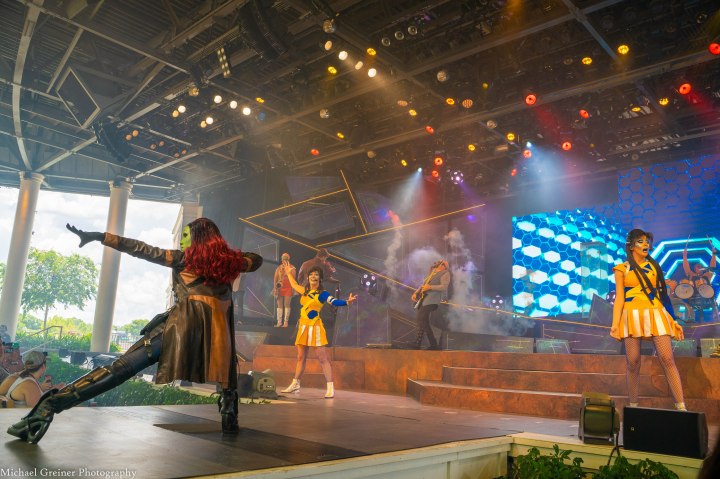 Quill is busy rocking out while this is going on. 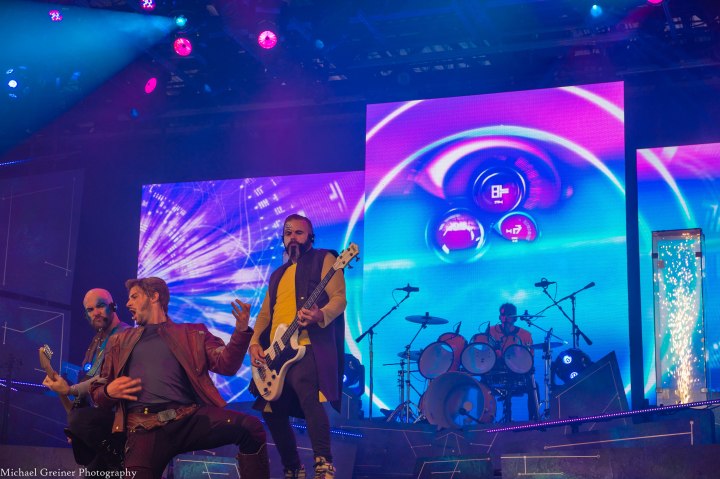 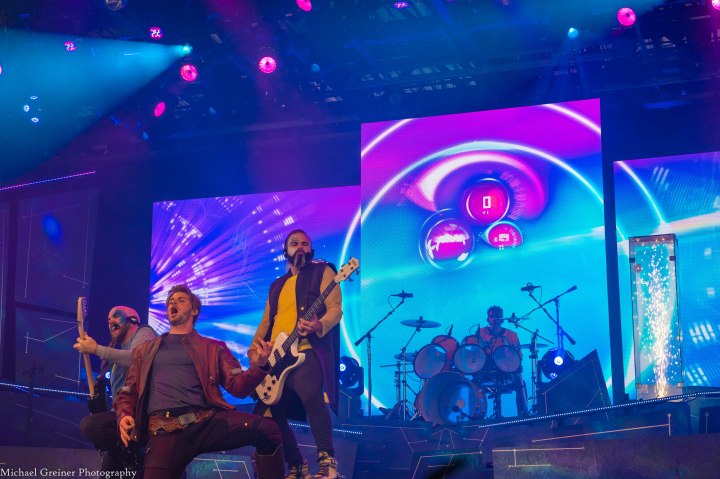 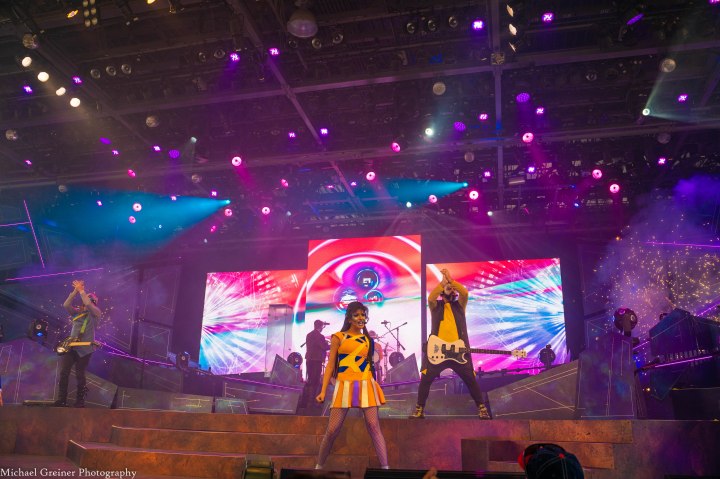 The guitar shredding continues with a rocking version of “Don’t Stop Me Now” by Queen. 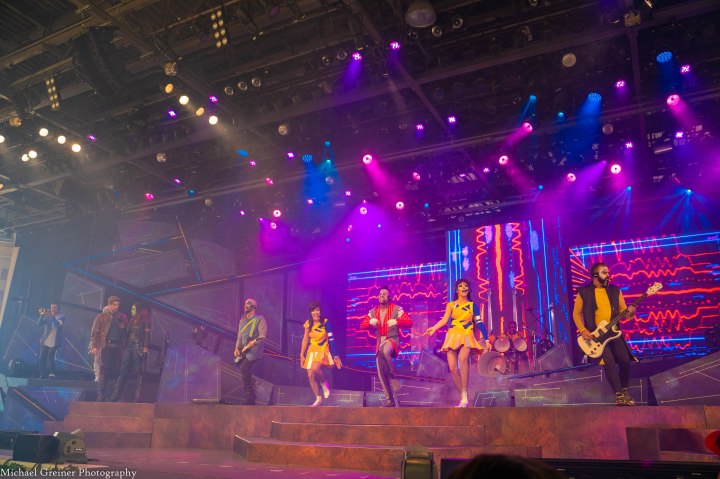 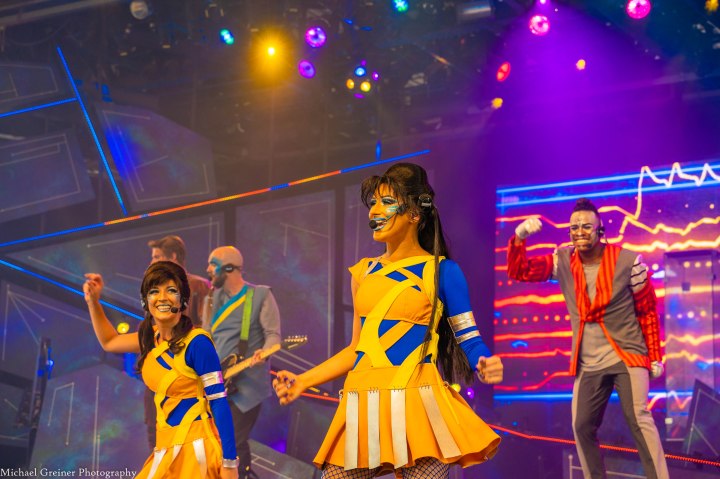 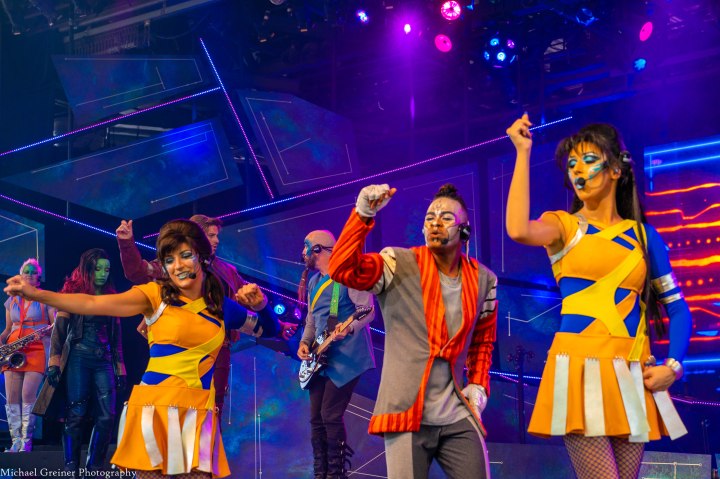 The Guardians finally get called away on some urgent business… Quill’s last piece of advice for the band is to adopt a catchier name.

And thus… The Star-lords are born! 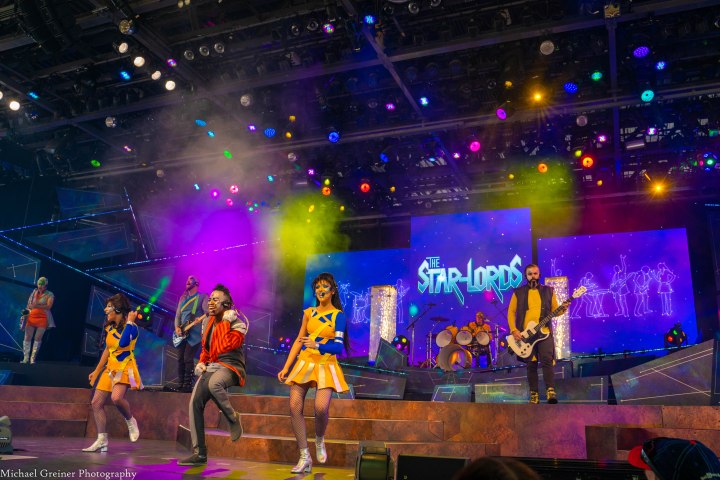 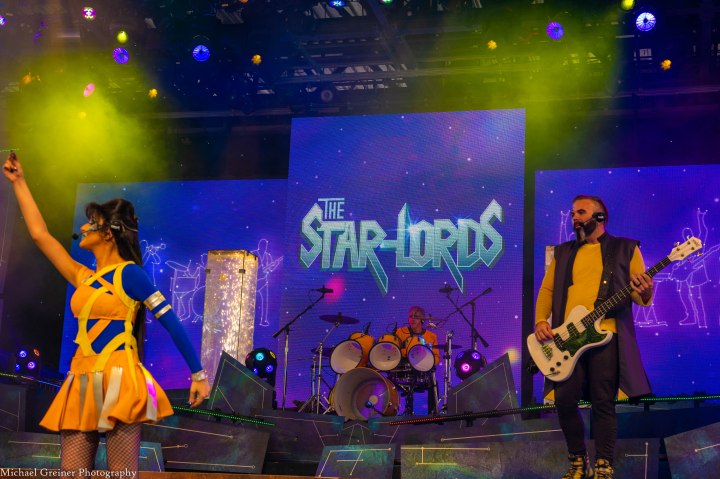 We finish things off with a show stopping version of the Jackson 5’s “I Want You Back”.

After what should be nothing else than a standing ovation, we exit the theater. If you look at the control booth you can find Rocket making sure everything runs smoothly. Sadly, there is not Drax to be found anywhere. 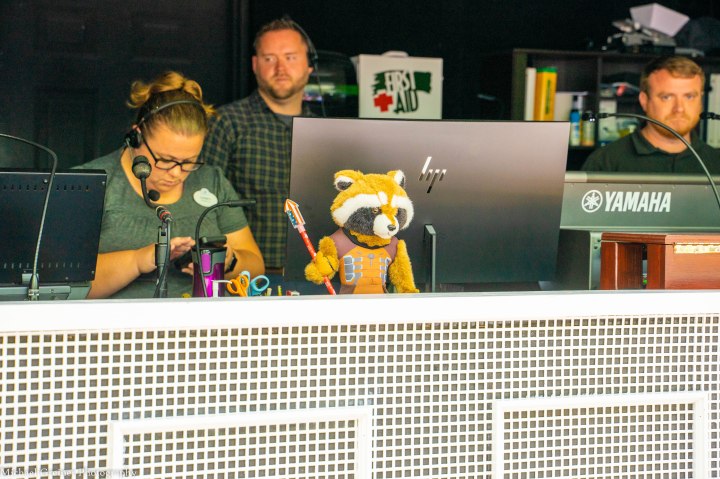 This show gets kind of a bad rap, mostly due to its location in World Showcase. I suppose its too cheesy for some as well but lets face it, those are not the type of people we want to be touring with anyway! We absolutely love this show for what it is… Great fun! The actors, singers and musicians are all excellent and the writing feels right at home with the Guardians films (our favorite franchise in the MCU)!

One thought on “Gardians of the Galaxy: Awesome Mix Live”