Back in our very first blog post, we made the case as to Why You Should Attend Mickey’s Not So Scary Halloween Party. Over the next week or so leading up to Halloween, we are going to take a close look at the 2018 party and all that it has to offer.

One of the big selling points in our initial post was the Hocus Pocus Villain Spelltacular! Despite all our initial praise of the show, after viewing it a few more times recently, I feel that our previous words didn’t do it justice. This is the best castle stage show Disney has produced in years and well deserves multiple viewings per party.

We aren’t particularly high on the film which the show is based on. It’s alright and we usually watch it on tv once a year around Halloween time, but we don’t view it as a great movie by any means. While its an overall fun film, its also oddly dark in some places and very corny in others. Luckily, this stage show takes all the best parts of the film, i.e. the Sanderson Sisters (and a couple songs), and has nothing to do with the rest of the film.

The show begins with an ensemble performance of “Season of the Witch”, originally recorded by Donovan (all the young kids nowadays love 1960s UK pop musician Donovan right?). This is a much happier way to start the show than if they had stayed true to the film. Murdering a young child on stage probably wouldn’t set the correct tone Magic Kingdom is going for. The public hanging which follows in the film would most likely be frowned upon as well.

Instead, this song is enough to bring the Sanderson Sisters back to life.

The witches appear right after the first song and they are in a word, wonderful. I am not sure how performers this good are even free to work all the Halloween party dates (I would assume they could easily find regular acting work), but I am sure glad they are. Perhaps they work for Disney playing other characters all year round, but if that’s the case it seems like a severe waste of talent. They are that good!

Not only do the performers both very much look and sound like their movie counterparts, but everything that was entertaining about the witches in the movie is turned up to 11 here. Winfred is a wonderfully charismatic ringleader; Sarah is hilarious and one of the best moments of the show is hearing the crowd cheer when Mary exclaims to Winnie that she “smells children”.

The ensemble is great as well. They provide entertaining choreography throughout the show and are almost as important to the performance as the sisters themselves. 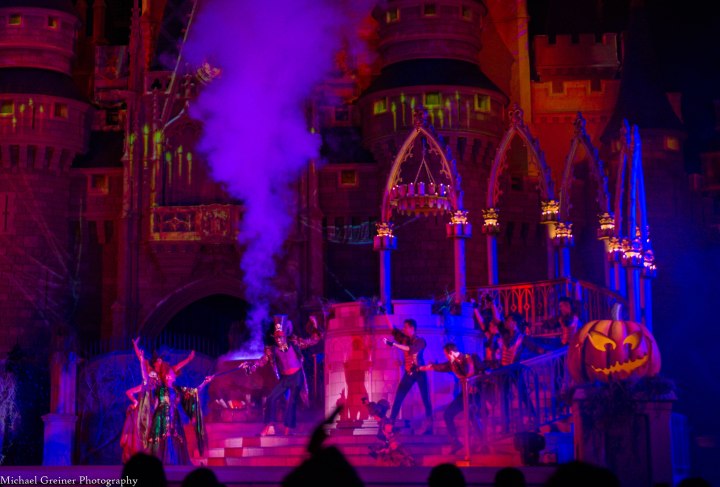 The basic plot of the show is that the Sisters have one night to restore their immortality, much like the film. However, here they intend to do so by creating a “Hocus Pocus Party Potion” rather than sucking the souls out of children. To gather the ingredients, they need a little help from some friends.

The first ingredient on the list is “shadows sinister”. Lucky for them, Dr. Facilier of Princess and the Frog fame shows up. This is much to the delight of Sarah particularly, who excitedly exclaims “A mannnnn….”! The Shadow man uses his connections with his friends on the other side to help the witches with their first ingredient.

The next ingredient required is “nefarious nightmares” This is naturally referring to nightmares which calls for a visit from our good pal Oogie Boogie! 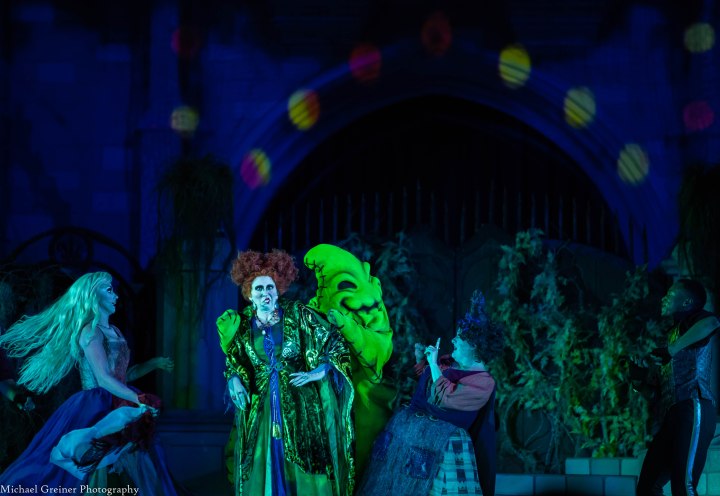 One signature song later and we have our second ingredient!

The last item on the list is “frightful friends”. For that we turn to perhaps Disney’s best villain, the ever frightful Maleficent. 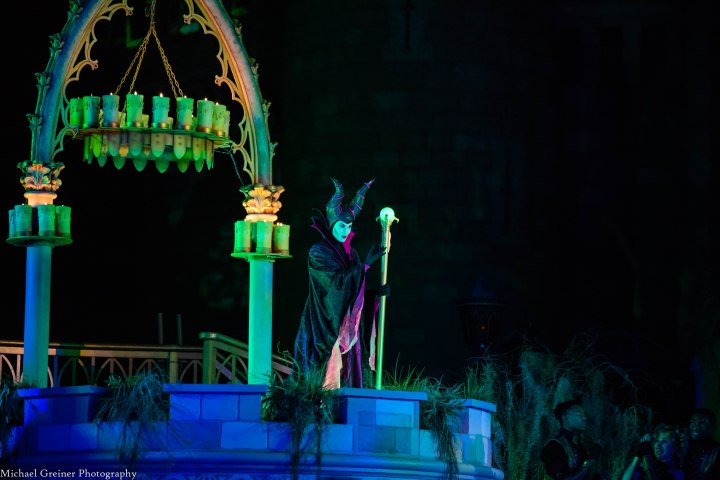 Maleficent calls on several classic Disney villains in a roll call for the ages. Each villain offers up a personal item for the potion.

A poison apple from the Evil Queen.

Some sort of eyeball from Hades.

A dog bone from Cruella. 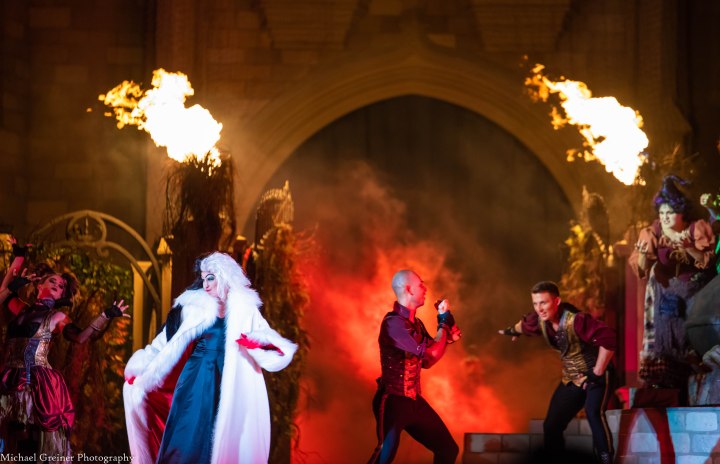 As a side note, Cruella is always so much fun whenever lucky enough to come upon her in the parks. We have rave reviews of her when reviewed Club Villain here as well. 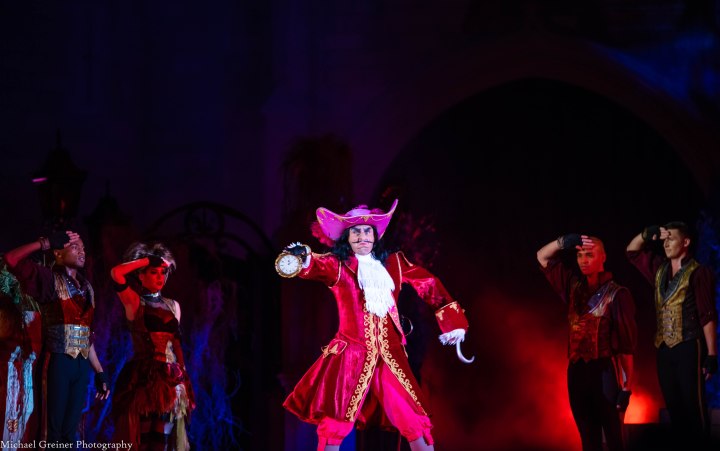 Moving on, a ticking clock from Captain Hook. 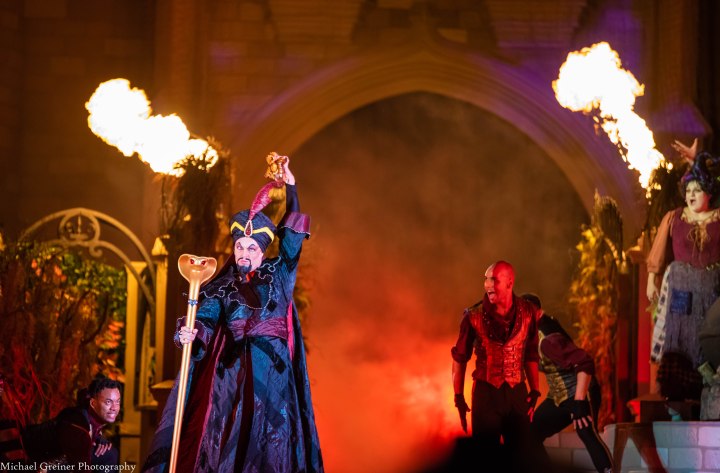 A golden scarab from Jafar. 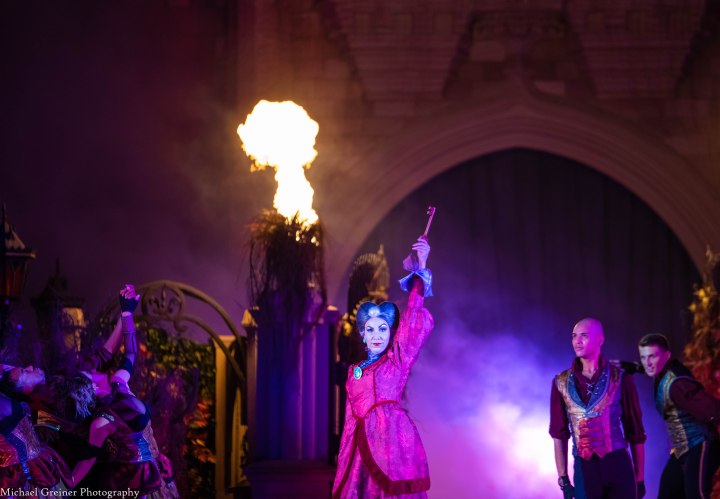 And a large key, presumably to lock Cinderella away with, from Lady Tremaine.

The final thing needed for the potion is the hair of an innocent which allows Sarah to sing her “Come Little Children” song from the film. 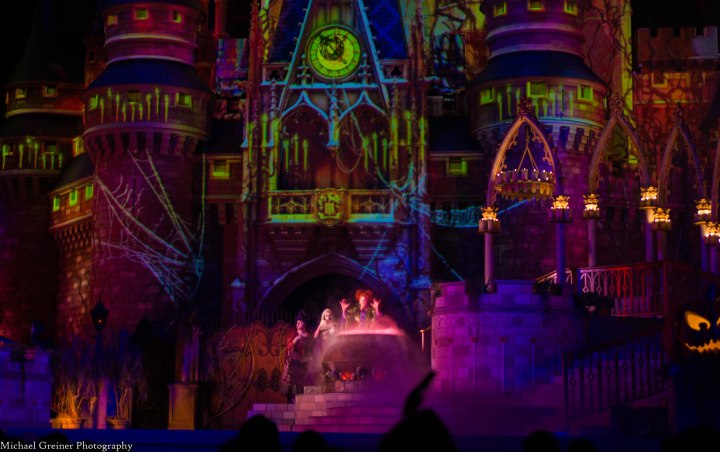 This all leads to a big finale, with Winifred singing “I Put A Spell On You”, which she also sang in the film. Like the rest of the show, the finale is great fun and puts a big exclamation point on a great show! 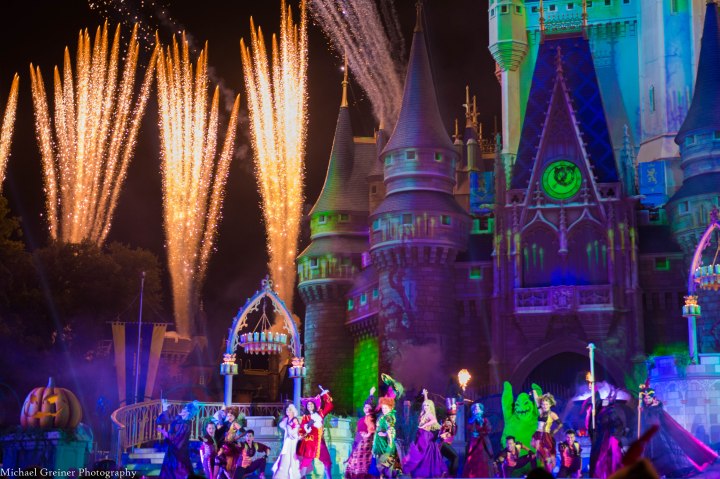 Overall, this show is not to be missed if attending MNSSHP. We recommend multiple viewings in fact. We like to catch the show in between Happy Hallowishes and the 2nd Boo to You Parade, as well as the final show at the end of the night. The last show starts right at midnight so it will allow you to extend the party for another half an hour or so.

We will be back very soon with an in depth look at the Boo to You Parade.

Some Favorite Quotes From the Show

WINIFRED: “We’ve harnessed the magic found within this kingdom to return for but one night.”

WINIFRED: “And we shall make it a grand night…”

WINIFRED: “A night that will long be remembered!”

MARY: “Winnie, remember what happened on our last Halloween?”

DR. FACILIER: “A tip of the hat from the one and only Dr. Facilier—also known as the Shadow Man.”

OOGIE BOOGIE: “Why, I’m just little old Oogie Boogie is all. You know, the shadow on the moon at night—filling your dreams to the brim with fright!”

WINIFRED: “What makes you so scary, you overstuffed potato sack?”

OOGIE BOOGIE: “My dear, I’m the stuff of your worst nightmares.”

WINIFRED:  “Let me see that! Let’s see here, “Frightful friends who add power to the potion—after all, a party is only as good as those you invite”?! What is this?!”

MARY: “It’s actually a very nice sentiment if you think about it”

WINIFRED: “Nooo, fools! We don’t have any friends.”

WINIFRED: “No, we’re sisters. I have to like you.”

MALEFICENT: “My, my… another party to which I wasn’t invited.”

WINIFRED: “Maleficent! Oh great one, if we had known you would come, we would have invited you for sure.”

SARAH: “We are not worthy!”

MARY: “Maleficent—she is greener than I thought. And those horns are huge? How does she sleep?”

WINIFRED: “Thank you, frightful friends!  It’s been a pleasure.  Sisters, we shall fly.”

MARY: “We didn’t bring our brooms…”

WINIFRED: “Then we shall walk!”